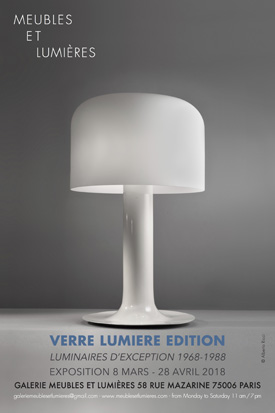 Gallery Meubles et Lumières is proud to present its new exposition of the editor Verre Lumière, comprising 40 different models - the fruit of many years of research and collection.

Verre Lumière is a French company created in 1968 by the master glass maker Max Ingrand (former artistic director of Fontana Arte from 1954 to 1967), the company Mazda (affiliate of Thomson) and the company Saint-Gobain (known for its long expertise in glass making).

Ben Swildens, a designer who was already well-known for his « egg lamp », edited by Fontana Arte, was named artistic director of the new company.  The commercial direction of Verre Lumière was entrusted to Jacques Vidal, who would play a key role in this new venture, and with whom Max Ingrand collaborated with 15 years prior during the construction of the ocean liner « France ». That project, a symbol of French luxury, was surely a forerunner of the birth of Verre Lumière, which would unite the French artisanal know-how with the modernity of its designers, thus representing the essence of French creation which would spread throughout the world until the 1980’s.

The mission of the company was the creation and fabrication of contemporary lighting, often made to measure. As a result of his training, Max Ingrand favoured the use of glass in his designs, for example his famous lamp in opaline glass (model 1853) created in 1954, initially edited by Fontana Arte then distributed by Verre Lumière.  The technical specificity of opaline glass confers a soft and homogenous diffusion of light and would become one of Verre Lumière’s signature materials, often associated with stainless steel, aluminum and brass.

One of the objectives of Verre Lumière was to conceive spectacular lighting projects, by close collaboration with architects, which were adapted and unique to each specific space, and created in a unified vision of architecture and light.  The company would collaborate with all of the big names in architecture of the period through prestigious projects such as (in France):

-Lighting in the dining room and private salons in the Elysée palace during the terms of Presidents Pompidou and Mitterand (architects Pierre Paulin, Sportes and Y. Agam)

-Ensemble of lighting in the Ecole Polytechinique de Palaiseau

-Headquarters and agencies of the Rothschild Bank

-Many projects at La Defense

Also throughout the world such as the palace of the Shah of Iran (Sabine Charoy), the French Embassy in Brasilia Brasil (Michel Boyer), and the Cosmos Hotel in Russia.

The close collaboration between the designers and the architects within Verre Lumière also permitted the development of high-end lighting collections in contemporary forms. Lamps, floor lamps, sconces and suspension lights - all available to these same architects, but also distributed and sold in small series in its emblematic store on the rue Faubourg Saint-Honoré, conceived by Ben Swildens, and in a network of some other well-known shops.  It is these exclusive and rare lighting pieces that the gallery Meubles et Lumières has reunited here for the first time.

Among the exposed pieces are the lamps and floor lamps by Michel Mortier in lacquered metal and opaline glass, those of Max Ingrand in brass, and the screen lamps by Michel Boyer which all share the same modern elegance in the sobriety of their form.  The folding « screen » lamp by Jean-Pierre Vitrac, the « system » lamp by Pierre Soulié and the extraordinary articulated floor lamp in chromed metal, designed by Ben Swildens for the Peugeot showroom on the avenue de la Grande-Armée all demonstrate the technical ingenuity of their des.

The luxury of Verre Lumière is incarnated by the perfection of execution and in the choice of high quality materials and is thus inscribed in the futuristic vision specific to the 1970’s. 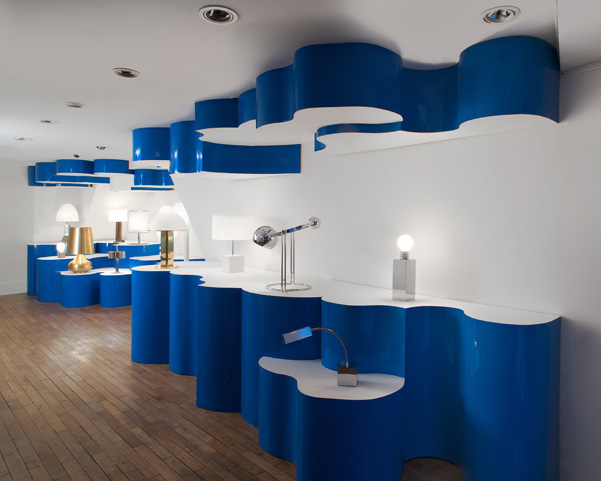 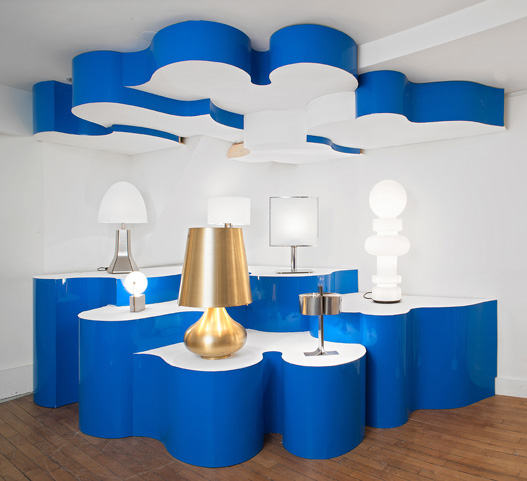 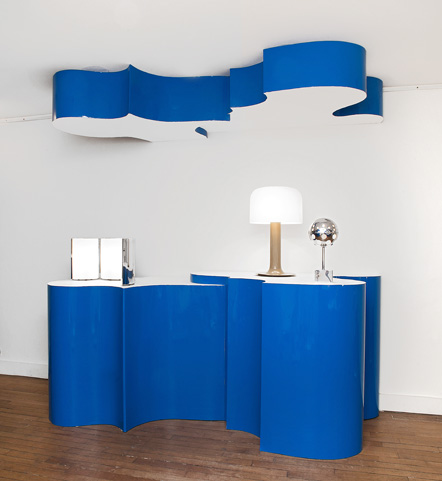 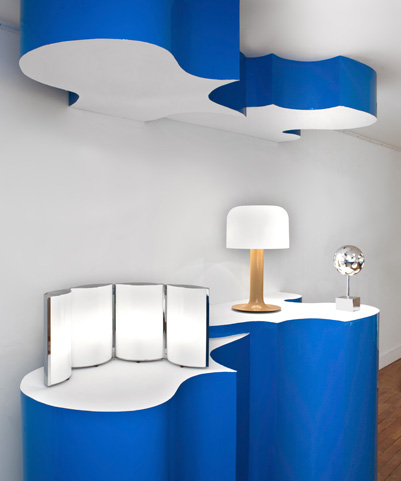